Captioning is the demonstration of spoken dialogues, scenes, contexts, or music present in the video content in the form of written text. At a glance, the importance captioning gets might seem overhyped, but the statistics are clear (and we will be discussing them), captioning helps garner more viewership and thus sales. This article is aimed at explaining the importance of closed captioning in the overview of video content making.

Let’s Look at Some General Statistics:

The Nielsen poll revealed that an average American in a day spends close to 6 hours of their internet time watching videos only. As such companies have tried to ponder towards this audience base with video advertisement. Another glaring statistic - About reported 500 million viewers to watch 100 million hours of video content on Facebook daily. Among these 500 million viewers, American Press Institute reported that 85% of the videos are being watched without sound.

Facebook for business conducted research that showed 80% of viewers reacted negatively to video ads that played loudly, urging advertisers to caption their videos. They also found that captioning increases the average view time of ads by 12%, some advertise citing captioning increased video viewership by 25%.

Necessity by law: The 2010 Twenty-First Century Communications and Video Accessibility Act (CVAA) require Video programming distributors (VPDs) to close caption their video content. This also includes those videos shown over the internet after having been shown on the TV. Also, the Americans with Disabilities Act (ADA) is a law that requiring places of public accommodation to be made accessible to those with disabilities.

The FCC requires captions to have four qualities – Accuracy, Synchronicity, Completeness, and Placements. The subtitles should provide proper spelling, timing, and grammar. It also requires synchronous run between content and captions (with a little leeway provided for live captioning). FCC also demands completeness of captions from the beginning of the program to the end and placement of subtitles such that it doesn’t obstruct the on-screen content.

The fact that laws are made to address accessibility to those with disabilities, however, doesn’t diminish the importance of captioning. The European federation of hard of hearing people (EFHOH) lists following to be the benefits of subtitling a video: 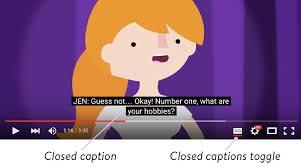